Fats, Alzheimers and the Case for Colors? 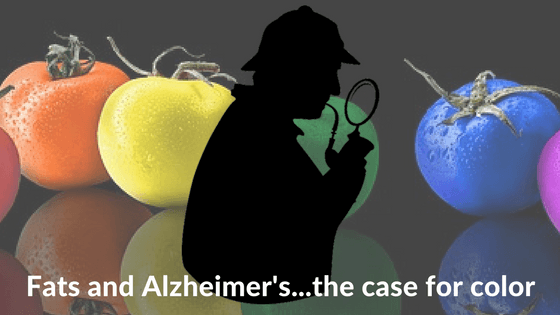 Have you noticed that you've been forgetting things more than usual lately? Slow to learn new things? Is it harder to stay awake?

These and other signs of mental decline are often associated with growing old, but they don't actually have to happen to you.

I can't tell you how many times I've heard people say that aging backwards is "hogwash".

It's not "hogwash" ...at least not from a scientific point of view when it comes to certain areas like the brain.

Don't get me wrong, will your body age? Of course it will.

It's a little known fact though, that the body and brain age differently.

Some brains seem to fit the body that goes with it... Others are older than the person they reside in.

For some people though, the brain remains young even as the body grows old. Why is that, and why do some people suffer from Alzheimer's or dementia and others don't?

But before we get into that, let's talk about Alzheimers As unbelievable as those numbers sound, they're a fact according to Alz.org, and we have to focus on how to minimize them.

Your brain on Alzheimer's

If you were to view the brain of an Alzheimers sufferer under the microscope, you would see that between the brains cells there are these really odd looking blobs...(seriously, they look like a hairball that a cat has hacked up).

They're called beta amyloid protiens and their damage is widespread.  Think of neurons as a social network like Facebook.

Everyone is connected, always communicating on some level, updating and adding more "friends" to their network. It grows and thrives.

But, what if suddenly they weren't able to respond to their "friends" posts. What if everyone was unable to see each other in their "friends" list? That social network would end pretty quickly.

Beta amyloid proteins cause neurons and their "network" to stop functioning, lose vital connections with other neurons, and die.

These are bad guys...no one wants to have these showing up in their brain. Your parents, and your risk

What about inheriting Alzheimer's? Will I have to end up like my mother or father?

There is a gene called the APEO e4 gene, and this actually increases the risk of Alzheimer's.

If one parent has it, your risk of developing familial Alzheimer's is tripled...Imagine if both parents have the gene.

So what can be done if it's already such a risk factor?

Well the good news is that these are not the only factors that go into the risk associated with developing Alzheimer's.

In 1993, The Chicago Health and Aging Project (CHAP) began a huge dietary research project on adults 65 and older. The participants kept very detailed dietary records over a long term period.

As the years progressed, the researchers noted which participants were still mentally "sharp" and which seemed to be spiraling into dementia.

They began to notice some undeniable patterns emerging within the research.

The participants who ate minimal amounts of saturated fats and had a regular intake of "good fats", reduced their risk of Alzheimers by 70%. 70%!!!

The high(saturated) fat  group began to lose their memory over time, but the "good fat" group was much much less inclined to go that route. Some examples of saturated fats are:

I'm not saying to never eat these foods, because they also have their own nutritional benefits. I'm saying that moderation appears to be key.

What is the recommended daily intake of saturated fats?

The American Heart Association recommends aiming for a dietary pattern that achieves 5% to 6% of calories from saturated fat.

For example, if you need about 2,000 calories a day, no more than 120 of them should come from saturated fat.

That’s about 13 or grams or less of saturated fat per day, which also happens to be lower then the amount of the people in the Chicago study who had such a low risk of Alzheimer's and dementia related disease.

To put that in perspective for you look at these examples.

1 grilled rib eye steak contains 28 grams of saturated fat. That's more then 2 times the daily recommended intake. Even if you eat only half of that steak, you're still over the limit, with this one single food choice.

1 slice of good old cheddar cheese contains 6 grams of saturated fat. That's almost half of your daily allowance....in one slice.

You get the idea...the more careful you are with your fat intake (what type of fat), the better.

But what about that "Alzheimers" gene? How does that come into play?

Researchers decided next, to focus their dietary testing ONLY on those people who had the APOe4 and guess what?

You got it...the people who ate very little saturated fat, but still had the gene fared much better then those who ate a consistent diet high in saturated fat.

This gives hope that you are not just your genes, and don't need to be held hostage by the fear that your path will be the same as those before you. You can take active steps to fight that.

One of those steps has so much research behind it that it's an overwhelming mountain of benefits.

There is a growing evidence that meditation can be beneficial for: In one study (Lazar et. all) people who had never done any kind of meditation before, were put through an 8 week, mindfulness meditation-stress reduction class.

At the end of the 8 weeks, their brains had increased in areas surrounding learning, cognition,memory and emotions.

Interestingly, it had also shrunk in one region. The amygdala, which is responsible for our fear and anxiety reactions. This makes sense, as it has long been studied beneficial for releiving stress and anxiety.

It's a no brainer and all it takes is a little time each day.

Just think, in 15 minutes a day, you could completely build your brain where it needs it, and shrink it where it should shrink.

Just think, in 15 minutes a day,you could begin to change your brain to make it more powerful and have less stress and anxiety!

Now... onto those colors.

Did you think I forgot about the colors?

Of course not. I know you've been waiting to see how those fit into early prevention of Alzheimer's.

Let's refer back to those gross hairball looking things called beta amyloid proteins/plaques that are destroying your brains neural network.

They were actually found to contain...metals. Specifically iron, copper, and zinc. Now I know what you're thinking...don't we need those in our bodies?

The answer is absolutely...but only in certain amounts and then it becomes too much.

Think about how much manufacturers add to foods, and over the counter supplements. I bet if you check your multivitamin it contains iron, and zinc.

We should be able to get adequate supply of these from foods but we're getting way more.

These metals are creating free radicals in our brains that are killing the connections between the neurons.

How do we fight what's already in our bodies and brains?

Let's go back to that amazing study in Chicago, because they also monitored the amount of vitamin E that people were eating in their food. Vitamin E is an anti-oxidant, and anti-oxidants fight free radicals.

Guess what they found? You guessed it, the big vitamin E people won out again, just like the low saturated fat group,by about 50% when it came to prevention of Alzheimers.

To be clear, there are different types of vitamin E, and unless you get it from the food it naturally occurs in, you may only be getting one type in a supplement. The participants in the study got theirs through food.

So anti-oxidants attack the free radicals from metal. Let's take that idea a step further...let's go somewhere over the rainbow 🙂

We have a rainbow of anti-oxidants at our fingertips for the picking.

Why is it that our fruits and vegetables are such bright, rich, beautiful colors, and not all beige?

It's because our brain is wired to recognize them, and without knowing it, the antioxidants in them.

I'm not talking about the colors that marketing and food corporations have "created" in candy or processed snacks.

I'm talking about the amazing colors of real fruits and vegetables. Turns out they don't just look pretty.

They each have different anti-oxidants, and when when it comes to beta amyloids, they can be put to the same use as vitamin E in your fight against Alzheimers. So....don't be afraid to stuff your face ! Add them to as much as you can-daily.

The possibilities are endless. The next time you're hungry, reach for color-REAL color.

If you know someone that may benefit from the research, please share 🙂

About the Author Russell Lundstrom