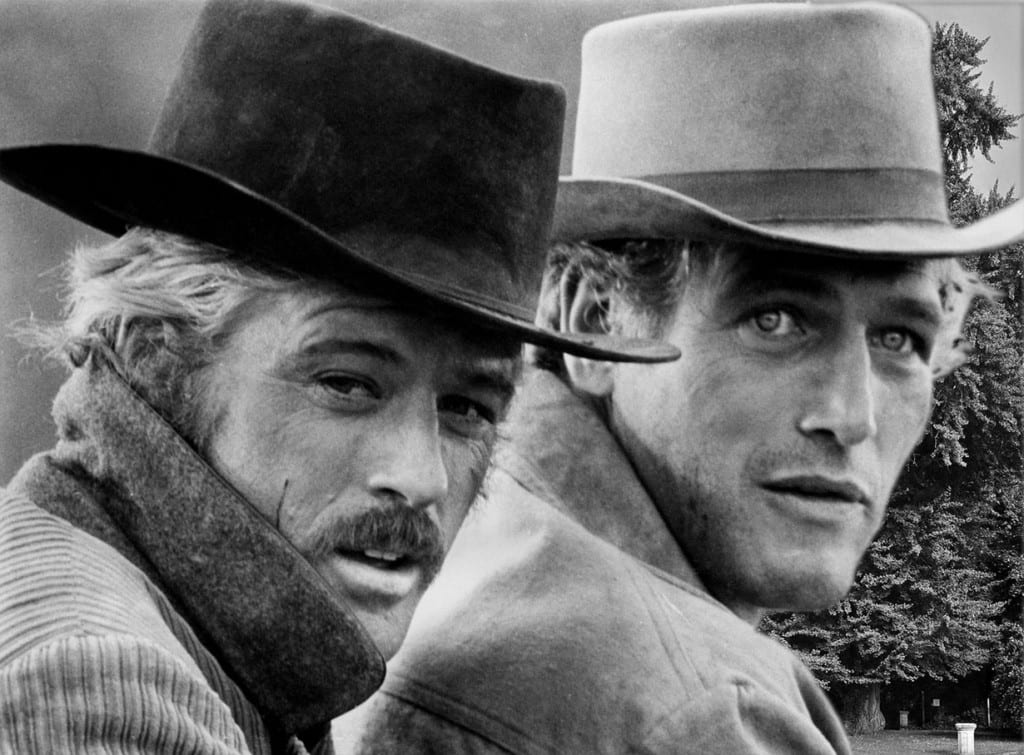 Every super hero needs to have a faithful sidekick. Butch Cassidy had the Sundance Kid.  Calvin had Hobbes. Batman had the always faithful boy wonder…Robin.

These side kicks don’t quite posses the powers of the main character, but they do bring their own “mini-powers” to the table, and they make the duo that much better.

When we set out to improve our original MindBoost Day formula, we knew our super hero ingredient was going to be bacopa monneiri, but we needed to find that special sidekick. The ingredient that would compliment bacopa, without overshadowing it’s sheer awesome-ness.

Then… we discovered the Maidenhair Tree.

This is one of the only trees to have survived throughout the Earth’s history. It is considered a living fossil.

They are said to live for more than 1,000 years, although China claim trees over 2,500 years old.

Sounds pretty heroic to us.

So… we started looking at the effects that ginkgo biloba has on the brain. That’s when we really started getting excited.

The Research On Ginkgo Biloba

In our never ending quest to find the most beneficial supplements, we turned to the best research and science available.

According to the Journal of the American Medical Association, the first trial of a ginkgo extract for dementia showed very promising results.

It improved cognitive performance and social functioning of demented patients for 6 months to 1 year.

Pretty impressive, right? Next we looked to the Journal of Alzheimer’s Disease. In this meta-analysis the researchers found that ginkgo biloba extract stabilized or slowed the decline in cognitive impairment and dementia. 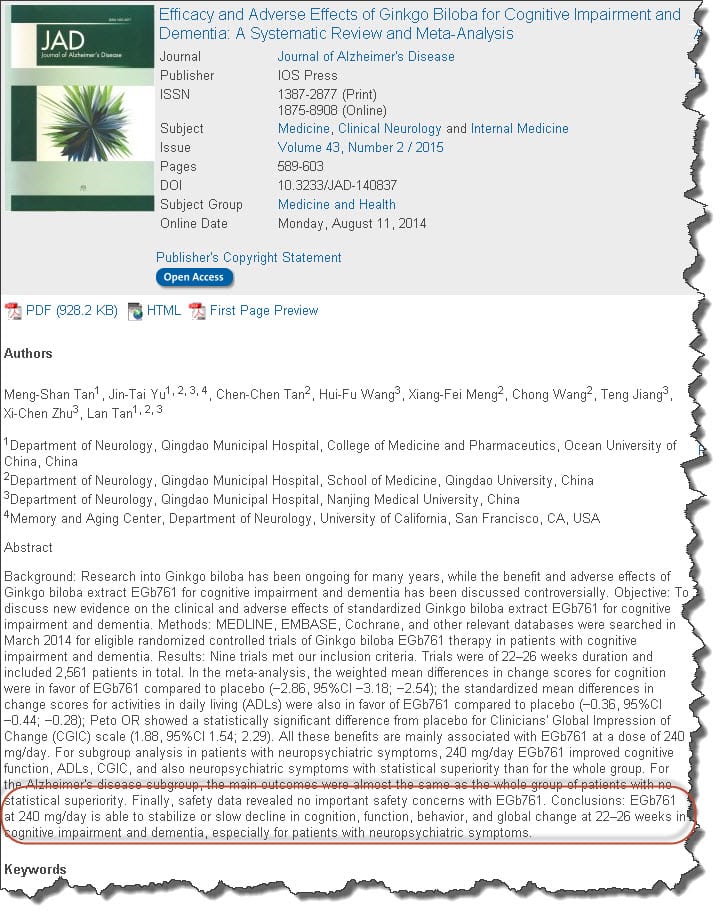 Efficacy and Adverse Effects of Ginkgo Biloba for Cognitive Impairment and Dementia: A Systematic Review and Meta-Analysis

Let’s look at one more out of the hundreds of studies.  You can review them here if want).

The Journal of Alzheimer’s Disease performed another meta-analysis of ginkgo extract.

Ok, so I don’t want to bore you with all the scientific literature and research on ginkgo biloba and the benefits it shows towards cognitive decline, dementia, and other brain related impairments.

If you really want to go deep into the research, again here is a great link to get you there.

Ginkgo Biloba Side Effects and Warnings

First and foremost, we strongly encourage anyone who is looking to add a supplement to their diet to consult with their physician first.

Everyone is different and your doctor will be able to give you the best advice about what to take and what not to.

That being said, ginkgo biloba does present some side effects and warnings for particular groups of people.

Also, individuals taking medications to prevent seizures or, if you’ve ever had a seizure you probably shouldn’t take ginkgo (let your doctor decide).

Ginkgo is thought to improve blood flow, so just like with any supplements, if you are having surgery or just coming out of surgery, please do not take any supplements until your doctor says its ok.

And finally, if you are pregnant or nursing it is probably wise to avoid taking ginkgo as well.

Ok, so far so good. Except for a small group of people (see above) ginkgo is known for thousands of years to be safe at recommended dosages. When you do decide to add ginkgo to your supplement stack, what can you expect?

First, nothing happens immediately. By that we mean if you are expecting some sort of energetic boost or rush from taking our products or ginkgo in general that’s not going to happen.

We are working towards long term brain health here,without adding stimulants to the mix.

You should expect be to be using the supplement for more than 6 weeks before deciding what results you’ve seen.

Of all the studies noted in our research concluded that the best benefits resulted from long term usage.

The longer you use ginkgo, the better the results (usually true for all of our products).

Ginkgo Biloba has a very long history and usage for improving memory.  As mentioned before, memory is a tricky thing to measure, but for thousands of years ginkgo has been used to help improve memory and retention. What our conclusions from the research show is that ginkgo helps increase the blood flow to your brain which is the biggest factor in better brain functioning. The more blood flow and oxygen you get to your brain the better it is going to work.

Primarily, the research seems to show that ginkgo helps prevent free radical damage to your brain and thus delays in cognitive decline and general brain health.

Ginkgo is also widely used to help treat tinnitus or ringing in the ears.  Tinnitus isn’t a condition itself, but is usually a symptom of another condition. Many people report very positive reports with ginkgo and tinnitus.

Ginkgo is reputed to have lots of other health benefits like improved eye health, circulation, and reducing general free radical damage throughout your body.

Like most people, we like to hear first hand what peoples experiences are with ginkgo biloba. Here are quotes we found around the web:

“I started using Ginkgo Biloba(5ml) intake everyday and it has greatly increased my libido and enhanced my intercourse performance…I am taking it alongwith Ginseng(5ml). I am very happy about the results which were noticable after mere 3 days of intake.” Jat

And truth be told replied: “Omg. I thought it was just me, I just take it alone and I’m a sex machine and can’t get enough. If I took it with ginseng I’d probably be arrested:p”

That wasn’t our first reason for using ginkgo in MindBoost Day, but sounds good to us 🙂

“I just started taking Ginkgo for sleep attacks during the day which created negative thinking and a depressed CNS. So much in fact I have been avoiding work for years and other simple tasks. When this sleepiness hits I would be totally wiped out. I started to feel Ginkgo’s effects after two doses (60mg). Today is my first full day without fatigue (two days after starting).” James

And he goes on to say: “To be honest I have not read anything close to what is happening to me now relating to Ginkgo. Its like an emotional dimmer is slowly being turned down and tiredness is losing its power. This is freeing up space in my head for concentration and focus. Sleep too is uninterrupted and better. I seem to need less yet get great results. In the past I have tried many antidepressants and even Ritalin. Ritalin worked well but nothing like Ginkgo”

“I have been taking Ginkgo for about a month. I have already notice a better short term and long term memory capability. My sexual interest and performance have increased, which I am loving. I feel I have more energy and endurance.” Gin

“I have been using Ginkgo biloba for approx 4 months now and have experienced more benefits than I thought possible. It has really allowed me to concentrate and focus at a level I didn’t think possible. I had not been able to concentrate for nearly a decade and couldn’t enjoy my favorite passtime of reading for as many years due to lack of concentration. It has been very beneficial in the “restless leg” syndrome I had been experiencing and lose of circulation in my legs. The cramps I use to experience is nearly non exesitant now. I am allergic to NSAIDS including aspirn, causing me to bleed from hole that shouldn’t. I do not experience this using the Ginkgo biloba.” Melinda

Now, that is pretty amazing reactions (source) from people and definitely speaks to the popularity of ginkgo.

As you can see, ginkgo biloba is a very exciting addition to MindBoost Day. We decided to add it as a the sidekick to bacopa monnieri and our other mind-boosting ingredients.

We felt that they would create a dynamic duo for long term brain health.

You won’t find another long term brain supplement that gives you full 24 hour supplementation to improve your overall brain health like MindBoost Day and MindBoost Night.

If you have tried MindBoost, ginkgo, or have any questions we would love to hear from you in our comments below: