CONGRATULATIONS ON YOUR ORDER

While your order is being processed…

I AM GIVING YOU AN EXCLUSIVE OFFER TO DRAMATICALLY INCREASE THE RESULTS OF YOUR STRESS MEDITATIONS!

Continue reading to get the most from your meditation practice...

Did you know you can AMPLIFY the Results Of Your Stress Busting Meditations?

Congratulations! You are on your path to get rid of the “silent killer” - stress.

Is stress doing this to you?

Making your mind foggy during the day or feel you are not as sharp as you used to be...

Or making you feel drained of energy daily...

Or causing embarrassing, “tip of the tongue” moments a little too often lately...

Do these memory issues make you feel stupid that you can't remember things that you should?

Maybe you feel like you’re failing in your work because competing with somebody younger makes you feel frustrated because your memory is not as good as theirs.

Or you cannot concentrate and focus even on the simplest tasks, and it leaves you frustrated.

If any of the events above sound a little too familiar, continue reading.

Stress contributes to a poor cognition.

So does not moving our bodies enough. Even a lack of good, quality sleep is a giant contributor to poor brain health.

But one of the most overlooked causes are nutrients, or lack thereof, that you put in your body every day.

Your brain uses 20% of the total nutrients you put into it. Good stuff in, good stuff out.

Junk food in... well, you see where I'm going with this.

In 1913, the average American at 13 grams of sugar a day. Today, that number is 153 grams – that’s almost one third of your TOTAL daily calorie needs!

We even have very little nutrient density left in our healthy foods, like veggies, because of over farming and lack of nutrient rich soil.

You see, your brain is lacking certain nutrients that help it regenerate, and work as it should. Think of it like this: if you don’t put gas and oil in the car – it won’t work. Same with your brain. Unless it is getting the key nutrients it needs to perform every day, it too, will fail.

The brain without the key nutrients is sluggish, forgetful, embarrassing, angry, and lonely.

our premium all natural MindBoost Day.

This is not an ordinary supplement, think of it as a potent memory supplement with only the highest quality grade ingredients.

There are no bad fillers, only the good stuff.

So, why do you need MindBoost Day?

MindBoost Day is developed with the purpose of helping boost your brain function, help improve cognitive health, and clearing brain fog. We sourced the highest quality, and purest ingredients that help maintain your optimal brain function.

With MindBoost Day you will help your body raise your energy levels, clear the annoying brain fog, and help your ability to recall memories and information faster - when you need it.

You already did something to relinquish your stress, now MindBoost Day will help you to nourish your brain.

Now, let’s talk about what is in MindBoost Day…

We only added ingredients that are proven to help you boost your memory, and preserve your brain health.

We started with Bacopa monnieri. Here's why, one research study working with healthy adults aged 65 and older showed significant improvements in intention, working memory while helping to reduce feelings of anxiety and depression. Other studies showed that the speed of learning, memory capacity, and increased energy levels were also greatly improved in just a 12-week period. Even more exciting is the second powerful ingredient called Rhodiola rosea.

Rhodiola rosea is from plants like goldenrod found in very cold regions of the world. Researchers have found that it has a pronounced effect on mental fatigue as well as increasing overall physical ability. The strongest data came from Russia and Sweden where they tested the fatigue of students caused by stress during final exams.

In fact, over a 20-day period the students who took Rhodiola rosea got 8.4% better grades than the students taking the placebo. Another study with night shift physicians found that taking Rhodiola rosea had a clear anti-fatigue effect. In some cases, as much as a 20% improvement and performance during a 24-hour shift.

We also added the active P5P form of Vitamin B6.

My mom has recently been in the RECODE program offered by Dr. Dale Bredesen to help her reverse the signs of dementia she’s been showing. She had cared for her boyfriend for an intense year when cancer riddled his body until he passed. Grief is a terrible thing for your memory.

My mom had very high levels of homocysteine and this directly affects the hippocampus.

“A group of experts reviewed literature evidence from the last 20 years and they concluded that elevated plasma total homocysteine is a modifiable risk factor for development of cognitive decline, dementia, and Alzheimer’s disease in older persons.

Further, high levels of homocysteine have been linked to memory loss and Alzheimer’s disease. The active P5P form of B6 brings down those levels” according to Amylee Amos from the Amos Institute.

We also included a proprietary blend of Vitamin B12 that I talked about before and folate, not folic acid, folate. Folic acid is synthesized, folate is the natural form from food and is more easily absorbed. It has been shown to increase cognitive function and help reduce the risk and rate of brain shrinkage. A recent study from Oxford University showed that over a two-year period people had 53% less brain decay and that's in just two years.

And finally, we put Vitamin D3 in our MindBoost Day formula. Over 50% of people over 65 are Vitamin D deficient. Two receptors for vitamin D are found throughout the brain and both play a critical role in making memories.

In fact, a team of researchers at Tufts University in Boston analyzed vitamin D blood levels in 1,000 people over the age of 65 to determine its relationship to cognitive function. Out of the 1,000 study participants, 65% had “insufficient” or “deficient” levels of the “sunshine” vitamin.  These people performed worse on tests of executive function…[ (such as reasoning, flexibility, and perceptual complexity),] attention, and processing speed compared with those who had optimal levels of vitamin D3.

You’ve done the first step to relinquish stress and take better care of your mental state.

But now it's time to take it up a notch.

Now you have an opportunity to take care of nourishment of your brain.

I am making you an exclusive offer for my MindBoost Day formula for just a few bucks more.

You made an intentional decision to reduce stress in your life, and I know you are serious about it. For that reason, I am offering you this one-time opportunity, in addition to my meditations, to get even better results by using my MindBoost Day.

No Thanks - I'll just proceed with my order as is. 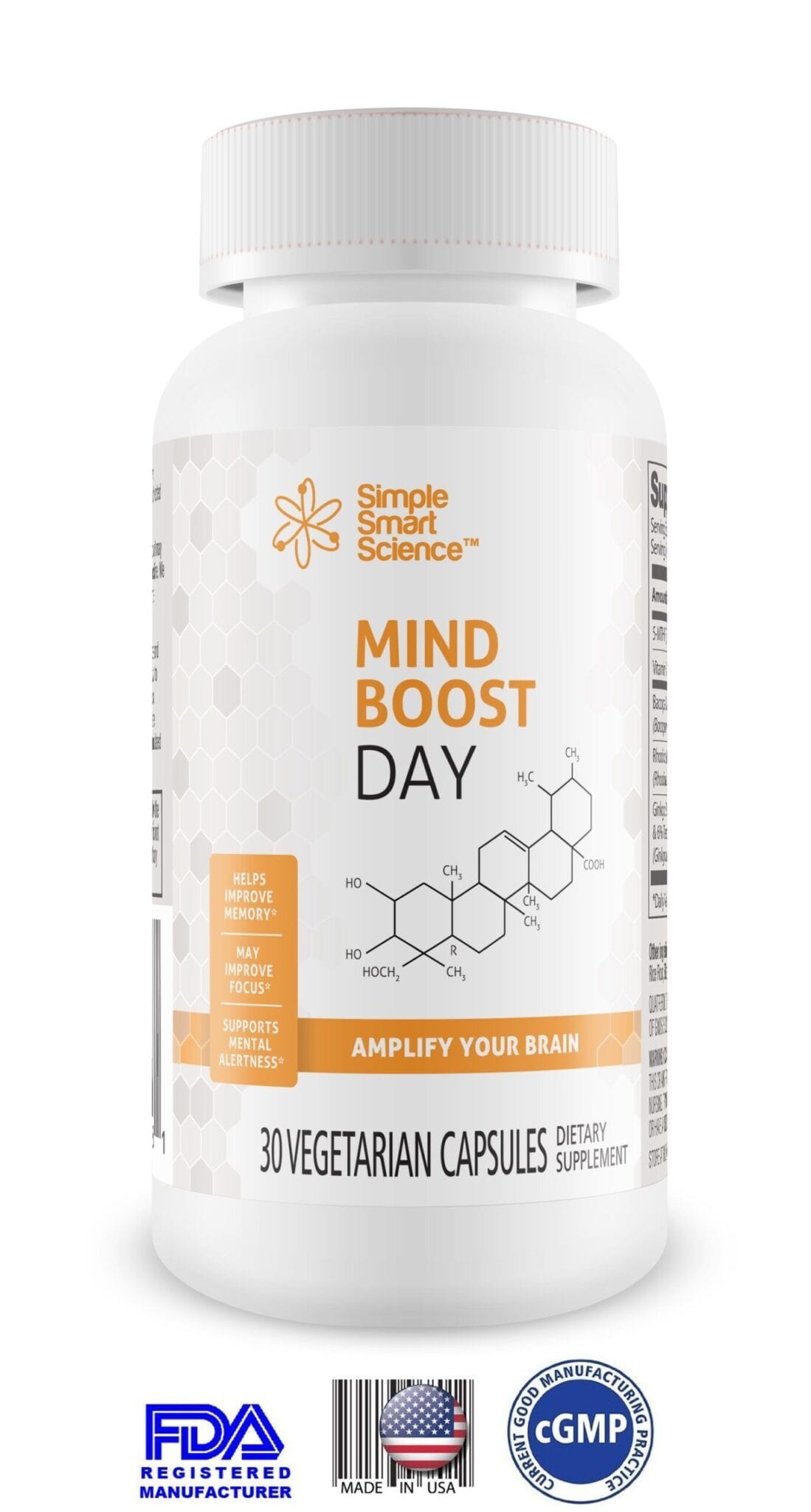 Now, you are probably wondering why to add MindBoost Day to my guided meditation.

The answer is simple, you’ll have better clarity, focus during the day, but also get the most from your Stress Busting Meditation.

Here are some additional benefits from using MindBoost Day in addition to your meditation:

BUT THERE IS A CATCH…

ONCE YOU LEAVE THIS SCREEN, THIS OFFER WILL EXPIRE!

See, I usually charge $39 for this supplement. BUT you’ve shown me that you are committed to combating stress with your purchase of my Stress Busting Day and Sweet Dreams Night Meditations. And, I know you would elevate your success with MindBoost Day.

No Thanks - I'll just proceed with my order as is.
Insert Styled Box

As I said before, I'm a researcher and educator in neuroscience and brain health. I've spent last eight years researching how to help prevent memory loss naturally after seeing what it does to people and their whole families personally.

My extensive research led me to scientifically proven nutrients that help the brain work as well as it should, stimulate growth of new brain cells, and that keep your brain healthy.

I have made it my personal mission to help over a million people have better cognitive health, relieve stress, and live a more fulfilled life naturally.

And with our generous 120-day money back guarantee policy you have nothing to lose. But you can gain concentration, focus, better memory, confidence, and I would dare say happiness as a result.

With a combination of our Stress Busting Day and Sweet Dreams Night Meditations, and MindBoost Day, you will have the life-altering tools and ability to handle, and deal with every stressful situation life throws at you. .

Here is what one of my clients had to say:

"Just wanted to let you know that in the 8 weeks I’ve been taking MindBoost Day, I’m not as “foggy” as I used to be, I’m clearer in my thinking, and my “word finding” ability (which had been a problem) is not as much of a problem anymore!

I am VERY pleased with this product.  Thank you!”

DON’T MISS OUT ON THIS EXCLUSIVE OFFER. ONCE YOU LEAVE THIS PAGE, IT WILL BE GONE FOREVER.

CLICK THE BUTTON BELOW, AND HAVE THE BEST “SMART SUPPLEMENT” HELP YOU TO A HAPPIER AND STRESS-FREE FUTURE.

No Thanks - I'll just proceed with my order as is.

Visualize life without a constant worry that you forgot something. Your memory is sharp. You have energy, you remember effortlessly, you have clarity and focus.

Don’t let memories you spent a lifetime creating vanish without a trace.

You have a choice to make. Make one that will help you stay YOU!

Your brain will thank you…

Again, MindBoost Day is backed by our 120 Day Money Back Guarantee!

This means there is no risk to you!

P.S. I did all the research, reading, studying so you don’t have to. Just make your order today, and enjoy benefits of a healthy brain!

THE INFORMATION PROVIDED ON THIS SITE IS FOR INFORMATIONAL PURPOSES ONLY AND IS NOT INTENDED AS A SUBSTITUTE FOR ADVICE FROM YOUR PHYSICIAN OR OTHER HEALTH CARE PROFESSIONAL OR ANY INFORMATION CONTAINED ON OR IN ANY PRODUCT LABEL OR PACKAGING. YOU SHOULD NOT USE THE INFORMATION ON THIS SITE FOR DIAGNOSIS OR TREATMENT OF ANY HEALTH PROBLEM OR FOR PRESCRIPTION OF ANY MEDICATION OR OTHER TREATMENT. ALWAYS CONSULT WITH A HEALTHCARE PROFESSIONAL BEFORE STARTING ANY DIET, EXERCISE OR SUPPLEMENTATION PROGRAM, BEFORE TAKING ANY MEDICATION, OR IF YOU HAVE OR SUSPECT YOU MIGHT HAVE A HEALTH PROBLEM. YOU SHOULD NOT STOP TAKING ANY MEDICATION WITHOUT FIRST CONSULTING YOUR PHYSICIAN. RESULTS FEATURED ON THIS WEB SITE ARE ATYPICAL. AS INDIVIDUALS DIFFER, SO WILL RESULTS. SIMPLE SMART SCIENCE DISTRIBUTES A PRODUCT LINE MADE WITH NATURAL INGREDIENTS. ALWAYS CHECK WITH YOUR DOCTOR FOR RISKS ASSOCIATED WITH DIETARY SUPPLEMENTS AND YOUR SPECIFIC HEALTH CONDITIONS AND/OR ALLERGIES.

REPRESENTATIONS REGARDING THE EFFICACY AND SAFETY OF OUR PRODUCTS HAVE NOT BEEN EVALUATED BY THE FOOD AND DRUG ADMINISTRATION. THE FDA ONLY EVALUATES FOODS AND DRUGS, NOT SUPPLEMENTS LIKE THESE PRODUCTS. THESE PRODUCTS ARE NOT INTENDED TO DIAGNOSE, PREVENT, TREAT, OR CURE ANY DISEASE.