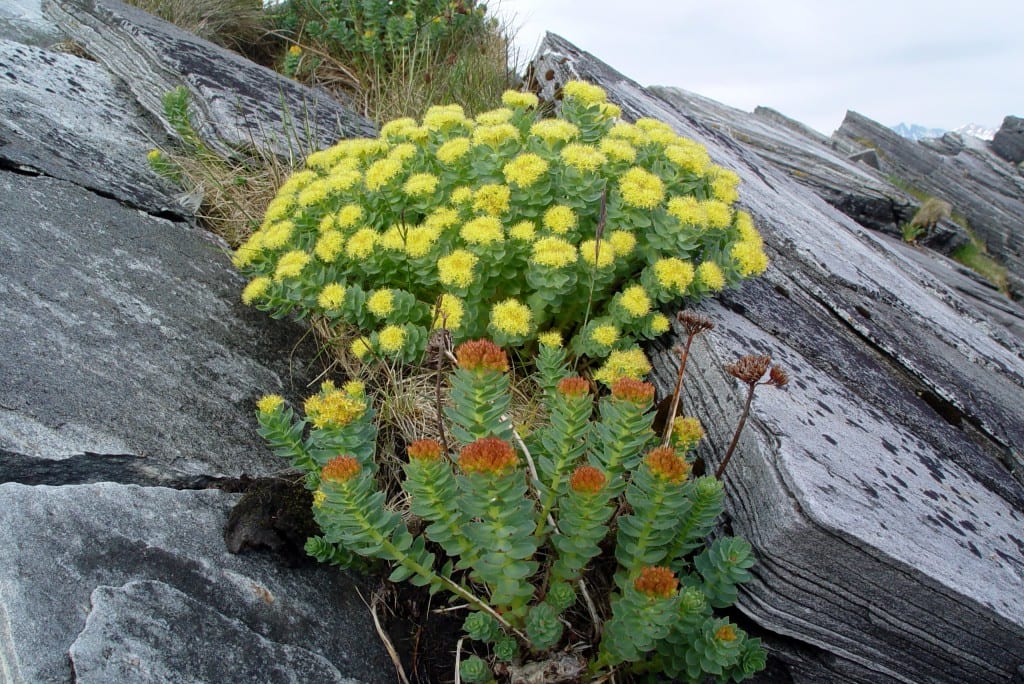 For centuries, the vikings and nomadic people inhabiting the coldest, hardest regions on Earth have depended on Rhodiola rosea for help with anxiety, depression, and stress. You can imagine going months on end without sunlight, fighting off polar bears, and just trying not to freeze to death can take a toll on your mental well being.

First documented around 40-90 A.D., rhodiola rosea has many different names: Golden Root, rose root, roseroot, Aaron’s rod, arctic root, king’s crown, orpin rose, and lignum rhodium to name a few, but each of these names are used to describe the same amazing plant.

You can imagine an plant that has been used for centuries for its health benefits has quite a long list of health benefits some more reputable than others. We have claims of rhodiola rosea treating everything from cancers, influenza, and the common cold to bacterial infections. While these may or may not be valid, what we do know is what the scientific literature suggests: that rhodiola rosea has been shown to help promote cognitive functioning and reduce mental fatigue. It has been proven to be very safe and effective and is perfect for nootropics. Some of the main research-based benefits include the following.

This study investigated the effects of rhodiola rosea extract on foreign students during stressful examination periods. Why foreign students? They are particularly exposed to higher levels of stress due to factors such as having to adapt to different climates, language barriers, unfamiliar social norms, and cultural conditions.  Given these stress levels in addition to examination periods this was an ideal group to test the benefits of rhodiola rosea on. What researchers overall conclusion is that the study drug gave significant results compared to the placebo group but that the dose level was sub-optimal. 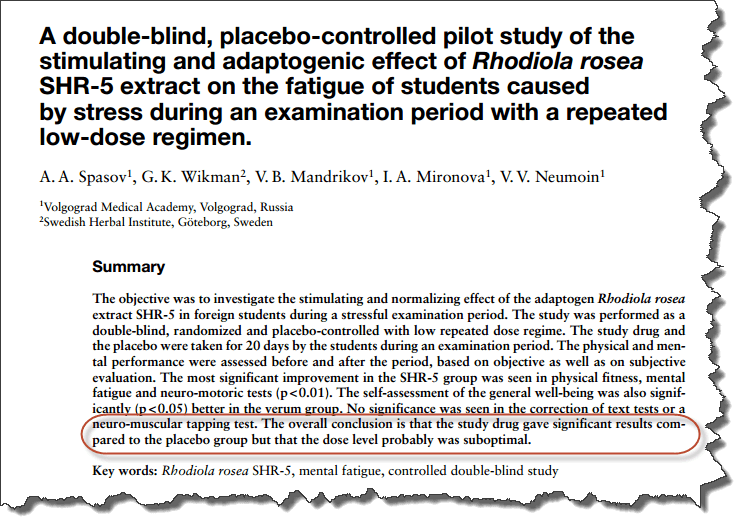 The aim of this study was to observe the effects of taking a low dose standardized extract on fatigue among a group of 56 night duty, healthy physicians. The testing included overall levels of mental fatigue involving complex perceptive and cognitive cerebral functions such as associative thinking, short-term memory, calculation and the ability to concentrate. What they found suggests rhodiola rosea can reduce general fatigue under certain stressful conditions. With NO side effects.

This study from 1986 suggests that tests performed on rats using the maze-method with negative reinforcement shows a “great significance of the method used for studying the effects of the pharmacological agents on learning and memory”. Although this study was performed on rats, the extrapolation towards humans is exciting. 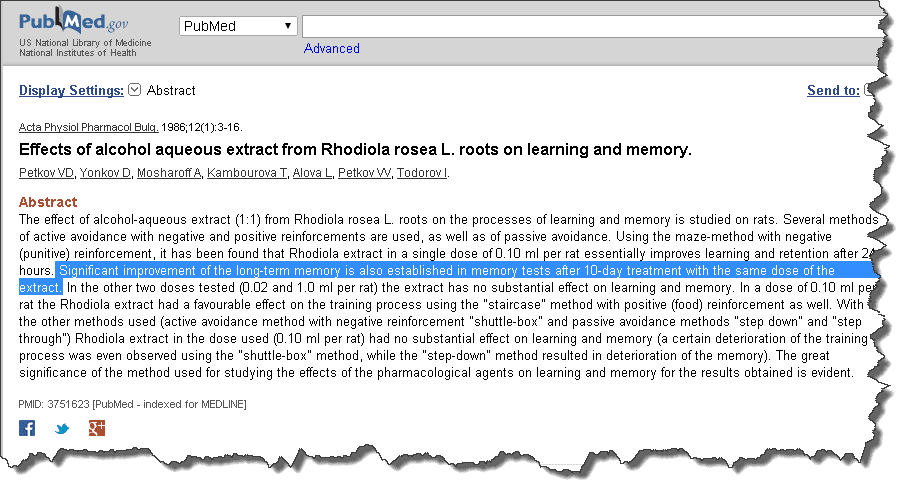 The goal of this study was to investigate the effects of RRE intake on physical capacity, muscle strength, speed of limb movement, reaction time, and attention. It was concluded that Rhodiola rosea intake can improve endurance exercise capacity in young healthy people. 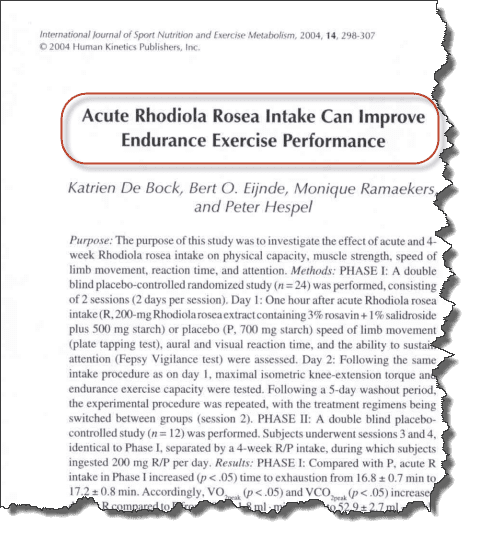 And the research goes on and on.

You can see that this amazing golden root can significantly help improve your brain health.

Is there a difference between Rhodiola Rosea and Rhodiola Extract?

Rhodiola extract is just another way of saying rhodiola rosea. It’s also known as Golden Root and arctic root, but it’s so widely used, that cultures around the world have their own names for it.

Rhodiola is an herb which grows at high altitudes in the arctic areas of Europe and Asia, and its root has been used in traditional medicine in Russia and the Scandinavian countries for centuries.

Rhodiola really does have an amazing history that goes back thousands of years. In 77 A.D., the Greek physician Dioscorides documented the medical uses of the root. He called it rodia riza , in his original medical text De Materia Medica .

Studies of Rhodiola rosea’s medicinal uses have appeared in the scientific literature of Sweden, Norway, France, Germany, the Soviet Union and Iceland for decades.

The Vikings were said to have used  rhodiola extract to enhance their physical strength and endurance.

Chinese emperors sent full expeditions to Siberia to bring back the golden root’ for medicinal preparations.

The people of central Asia used a tea brewed from Rhodiola rosea for the cold and flu.

Mongolian physicians prescribed it for tuberculosis and cancer.

The Russians secretly began studying  Rhodiola Rosea during the cold war. It was given to their military officers, Olympic athletes, political leaders, international financiers, cosmonauts, master chess players, and even the researchers themselves.

Rhodiola extract has always had properties that people have recognized as medicinal.

It’s very mild and has extremely minimal side effects.  It isn’t on any lists of banned substances, and because of that it continues to intrigue modern researchers globally.

How does Rhodiola work?

Rhodiola rosea is an adaptogen. These are substances that help our bodies adapt to stressors. It’s been shown to improve symptoms of stress, reduce fatigue, help with clarity, focus, and memory lapses (aka “brain fog”).

In Eastern Europe and Asian pharmacies, rhodiola based products are sold as remedies for depression and fatigue.

In last decade, rhodiola extract has come to the attention of the U.S, and the scientific studies are growing around its benefits.

Where can I get Rhodiola Rosea?

Rhodiola is readily available online and in stores, both by itself and in formulas, usually geared towards brain health. This is one of the key ingredients in our proprietary brain formula –Mindboost Day.

If you’ve decided to purchase this little gem, make sure that whomever you buy it from, can supply you with a certificate of authenticity showing the ingredients that they are claiming to have in their product… are really there.

Rhodiola Rosea Side Effects and Warnings

Research has shown that RRE has a very low level of toxicity. The standard measurement in science is known as the LD50 (when 50% of the animal population tested die).  The LD50 of Rhodiola Rosea was calculated to be around 3,360 mg/kg. If you were to extrapolate this number to a grown adult human, the equivalent dosage would be around 235,000 mg. Recommended clinical dosages for adults is 200-600 mg/day which is nowhere near any dangerous levels.

Previous Post Citicoline and CDP Choline Supplements for Improved Brain Health, Concentration, and Memory Next Post What I learned about my brain health spending a few months in Sweden