Stress and Your Brain 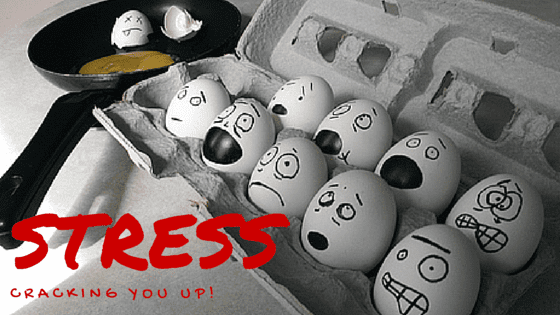 We all have it to some degree. Some people have a lot of it. We’ve all heard ‘stress kills’, but is that really true?

Stress is your body’s natural reaction to external factors and it helps us cope. AND not all stress is bad for you (more on that later).

Stress is literally something in your external or internal environment causing your body to release chemicals. These chemicals increase your heart rate and breathing and blood pressure. This moves more oxygen rich blood faster to your brain and to your muscles in case you need to ‘fight’ or ‘flight’.

Think of a gazelle getting chased by a lion. Its heart rate increases along with its breath so that it has more oxygen and energy getting to its muscles to run faster and outrun the lion.

Our human brains do the exact same thing in 2 stages.

If you’re being chased by a lion, what do you need?

That’s pretty much it. And that’s what you get when get stressed. It is natural.

First, you first release a chemical called adrenaline. Adrenaline causes a rapid release of glucose and fatty acids into your blood for energy.

Your heart rate speeds up and your breath quickens to get more oxygen to make your muscles perform better.

These chemicals also speed your thinking processes so you can outwit the lion – turn here, jump over here…

But that’s it. That’s all your body really needs to get away from the perceived danger.

Everything else in your body shuts down.

Your brain releases other chemicals to STOP other functions from working as they are unnecessary in an emergency. For example:

If your life is on the line and stress kicks in, none of these matter.

This is where it gets tricky for us humans. First, we’re rarely, if ever are in eminent danger. Some of us voluntarily live more on the edge than others and yes, some people are exposed to crime.

But this is the exception, not the rule for most of us.

Have you ever been chased by a lion?  Yeah, I thought so…

So, it seems as humans, we’ve adapted this ‘stress’ reflex to pretty much everything else we do in life.

And that’s where we see the long term damage.

A chemical called cortisol – this one is really important to remember – gets released after adrenaline is released and ONLY if the threat is severe or lasts for more than a couple of minutes.

Think of cortisol as the 6th gear on a car – only really need to really take everything up a notch for long term events.

Cortisol keeps your blood pressure and blood sugar up to help you escape from the danger if it isn’t fleeting. Short term, this isn’t a problem.

It’s cortisol that gets us in trouble when it comes to stress long term.

When the perceived ‘threat’ passes, we are supposed to release a hormone that counteracts the cortisol and brings us back down to a non-stressed level. The lion’s exhausted and given up. We can start grazing again.

But as humans, we have an uncanny knack for perceiving everything as a threat. We have a heightened fight or flight response that frankly isn’t necessary in this day and age.

So, we produce more and more cortisol to cope with these perceived threats – late for a meeting, misplaced car keys, misunderstandings with loved ones or co-workers.  None of them are life threatening, but our brains don’t know that and act as if they are.

If your cortisol levels don’t decrease to the non-stress levels, you are in a constant state of imbalance.

We over burdening ourselves, thinking we can ‘do it all’. We never ask for help and most people have huge financial stress to top it off.

Our normal cortisol levels can stay at a level that supports a dozen lions chasing us all the time.

And this gets us into all sorts of trouble and where the phrase ‘stress kills’ holds true.

Long term heightened cortisol in our systems has been shown to hurt your immune system.

A weakened immune system means you get sick. You may even get a disease.

Remember that your body puts more fatty acids in your blood when you’re stressed so that you can have more energy to your muscles to run from that lion?

Well, long term those fatty acids can cause heart attacks.

But the real story about cortisol comes in when you’re talking about a lifetime of stress and what it does to your brain…. to be precise – your memory.

Your brain creates and stores memories in a section of your brain called the hippocampus. This area of the brain also makes the chemical that stops the cortisol in its tracks.

Your brain makes cortisol to manage stress. The hippocampus counteracts this to get you back in balance. However, excess cortisol damages the hippocampus making it less able to produce chemicals to stop the cortisol. Thus there is even more cortisol in your system, damaging even MORE of your hippocampus.

And around and around it goes until your hippocampus isn’t able to stop the cortisol any longer.

Don’t forget – this is the same area of the brain that produces and stores memories. So guess what is the first to go when the cortisol levels start to destroy the hippocampus?

The more stress = the more cortisol = destruction to your hippocampus = loss of memories and ability to store new memories.

You can create new brain cells in the hippocampus.

Learn something new. Everyday. Without fail.

Studies have shown over and over again that if you challenge yourself, if you learn something new, you grow brain cells to take in this information.

And I’m not talking about ‘brain games’ from those popular websites online. Yes, they’re fun, but they aren’t challenging you to learn something new that is going to challenge yourself.

Get out there and learn to play an instrument. Learn a new language. Learn to write music or calligraphy… anything to use that part of your brain.

If you give up, you’re just giving up on your brain and are destined for more and more forgetfulness, harder learning and more frustration in life. Don’t do this to yourself.

Want to jump start this process faster? Use MindBoost Day and MindBoost Night.

Not only does the 24 hour protection of MindBoost Day and Night help reduce the rate of brain decay, it actually helps you recall faster.

Basically, MindBoost is a lubricant to help your thoughts and processes travel faster to the different connections in your brain. It also helps to flush out the toxins faster that build up over the day.

This may make starting to learn something new easier than just starting on your own with those rusty, old gears.

More importantly, it can help with the long term damage that cortisol does to your brain. It becomes the extra barrier to the long term harmful effects of cortisol.

Thanks for the great image Topgold