We may soon be able to hit the DELETE button on Alzheimers-Fact or Fiction? 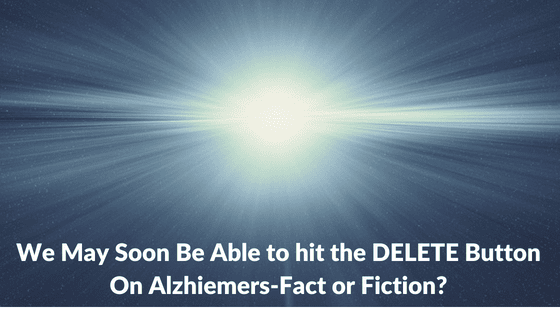 Have you ever stopped to think about the inventions that we're so used to using in our day to day life?

I was just talking to our 10 year old last night, about things that used to be "science fiction" and are now completely necessary parts of our modern world.

Let's be real...If someone had told the 10 year old me about cell phones, I would have thought you were bonkers...Now, if you tell our 10 year old daughter about rotary phones, she looks at you like YOU'RE bonkers. Let's take a little trip back in time so that you can see what I mean...

The list is too long to name them all here.

Things like lie detector tests, radar, solar energy, atomic bombs, bionics,in vitro fertilization, genetic engineering, communication satellite technology, and on and on...they were all in someones imagination long before they became our reality. So...when someone like Dr. Michael Fossel MD, Phd says that he thinks his new approach of (I'm simplifying this big time) taking cells that are young, pre-Alzheimers, and inserting them in to the hippocampus, and then letting them take over the Alzhheimers cells...AND that soon it will reverse and actually cure Alzheimers? I feel like if I don't take a long hard pause and really listen to what he's saying then I'm doing him a huge disservice.

Throughout our history, we've seen the most fantastical ideas become reality. So why not this?

Is he crazy, or is he a visionary? Well, the hopeful optimist in me says visionary..and if that's the case I'd like to buy stock in his company :).

He got his M.D. and Ph.D. at Stanford University, where he taught neurobiology and research.

He served as Executive Director of the American Aging Association, and was Founding Editor of Rejuvenation Research.

He’s a an expert on telomerase and age related disease.

We've written about telomeres before, but telomerase is the enzyme responsible for creating the caps on the telomeres that keep the time on our aging process.

Scientists believe that the loss of telomeres leads to eventual loss of important,areas of DNA that are basically "written" to do certain things. Eventually the cells can't divide and do what they need to do, and this is when things like Alzheimers are seen.

According to Dr. Fossel, in an interview done for Waking Up from Alzheimers-Regain your brain, he says : "I think within three years, we can demonstrate that we can both prevent and cure Alzheimer’s disease."...Wait....What???? Three years???

How is this possible?

Well, he say's that he's preparing now to do human trials ...NOW..on this intriguing treatment for Alzheimer’s.

If you're asking the same question as me - "How can he possibly do human trials and have the data he needs within 3 years?"... Then you and I are on the same page..see? Science fiction....

Dr. Fossel and his team have already been doing animal trials, and have been "astounded" with the results.

His hope is that humans will have the same or even better results.

According to him, he thinks it's possible to see a huge reversal in cognitive decline.

I don't think anyone assumes that in cases of progressed Alzheimers, everything will snap back to normal, but he seems pretty sure that they will see a significant difference. Apparently different cells age at different rates, and some cells like cancer cells and germ cells (ova and sperm) don't age at all.

On the other side of the coin other cells in our body DO age and the telomeres get shorter and shorter, so basically different cells are aging at different rates-but what if we could re-set those cells to an earlier time where Alzheimers was not a factor?

When cells divide, the telomeres become shorter and shorter and the rate of shrinkage is what causes the cells to change their gene expression and age more rapidly.

Telemorase (remember the enzyme I was talking about earlier?) re-lengthens telomeres, but some cells have it turned off (like the settings in your phone apps).

According to Dr. Fossel, what they do with their treatment is almost like inserting computer code into the cell to say, “Make this enzyme now, please.” And when it does, it relengthens telomeres, and that resets gene expression, and cells begin to act normally again.

That sounds AMAZING-and a little like science fiction right???

Science has been pretty clear in it's findings that lifestyle can have a huge impact on age and Dr. Fossel agrees with that.

Even though this treatment may impact already impaired brains, you should still take steps to keep your brain healthy before needing this treatment.

As always, this includes a well rounded approach including:

So, what do you think about this incredible new idea? I'm beyond excited to see what happens with this, and if all goes well in his timeline, I may actually be ABLE to see it...and soon. Here's to the future and science fiction:)

If you think someone may be interested in this new approach to treating Alzheimers, hit the share buttons at the top of the article!

About the Author Russell Lundstrom